Miami Beach officially dropped the ban proposal on March 13 after the public sutnick hour and having received many emails opposing. 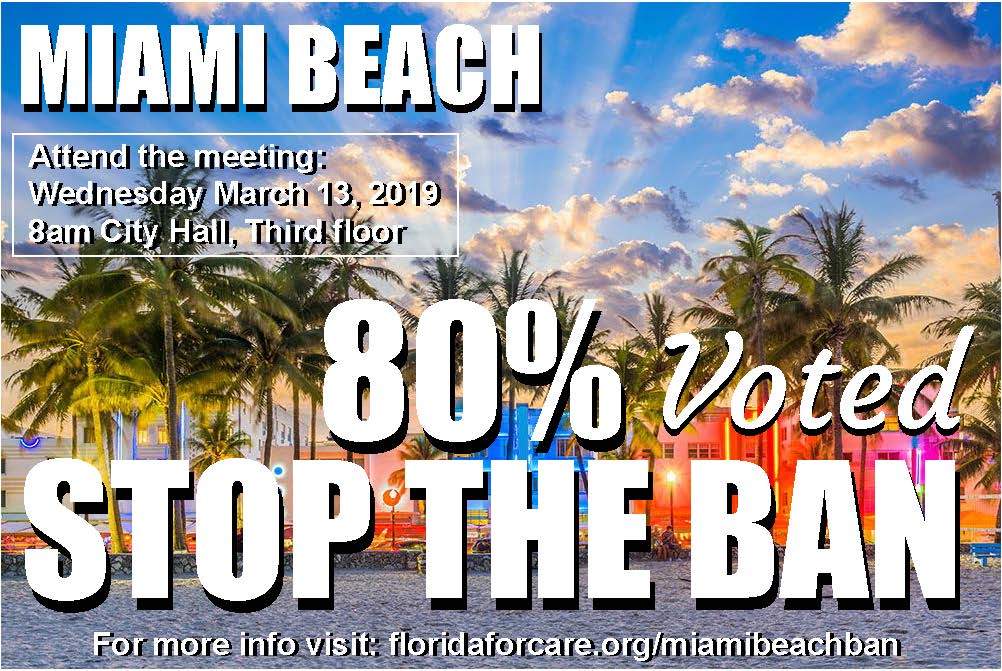 The Senate Health Policy Committee on Monday OK’d the bill (SB 182) by Sen. Jeff Brandes, a St. Petersburg Republican, but that was after amending it with language from chair Gayle Harrell, a Stuart Republican and health care consultant, that divided the panel.

The legislation first died on a 5-5 tie vote, was revived on a motion to reconsider, and the affirmative vote by Rouson, a St. Petersburg Democrat, put it over the top. Rouson said he changed his vote to move the bill along and ensure it wasn’t dead for the 2019 Legislative Session, which starts March 5.

The Florida House and Senate are poised to take up smokable pot bills in the first week of the 2019 session.

There are some differences in the bills that will have to be worked out. The House bill (HB 7015) allows adults to use smokable marijuana, but it prohibits the dispensaries from selling other whole-flower products. The House bill also bans children from smoking.

The Senate bill (SB 182) would require marijuana dispensaries to sell at least one type of pre-rolled, filter-less cigarettes and allow them to sell other whole-flower products. It would allow sick children to smoke if approved by a second opinion from a pediatrician.

Agriculture Commissioner Nikki Fried, who recently appointed the state’s first cannabis director, says she supports the legislation with the “least amount of restrictions.”

Tuesday’s election results were a mixed bag for partisans: Democrats regained control of the House, while Republicans extended their Senate majority.

But one clear winner in the midterm elections was marijuana.

Michigan voters approved a ballot measure making their state the first in the midwest to legalize cannabis.

Missouri approved an initiative to allow medical marijuana, as did Utah.

There are now 33 U.S. states that have legalized marijuana to some degree, and recreational pot use is now legal in 10 states, along with Washington, D.C. But possessing, selling or using marijuana remains illegal under federal law.

Coming into the Nov. 6 vote, both Michigan and North Dakota already had medical marijuana laws in place. Utah and Missouri didn’t have far-reaching legislation on the books, though Missouri had lightened the potential penalties for first-time offenses.

Carlos Curbelo Calls on Jeff Sessions, DOJ to Get Out of the Way of Medical Marijuana Research

Noting that the federal Drug Enforcement Agency had approved plans for Tilray, a company based out of British Columbia, to import CBD and THC for studies on how to treat nerve pain, Curbelo called on the U.S. Department of Justice to get out of the way of domestic companies trying to do the same thing.

Nearly two years after Florida voters approved the use of medical marijuana, Tallahassee needs to implement the policy more effectively, but state officials should not take the extra step of legalizing the drug completely.

That’s the view of the Florida Influencers, a panel of the state’s leading voices from across the political and policy spectrum. In a new survey, 85 percent said Florida officials should make it easier for qualifying patients to obtain medical marijuana, while 15 percent said they should not.

We asked Florida candidates if they’ve smoked marijuana. Here’s what they said.

Marijuana use is on the rise in the United States. A federal drug survey released last month found half of American adults have tried marijuana once in their life, the high point of the last 20 years. As marijuana grows more ubiquitous, sentiments about the drug have shifted, too. More Americans than ever, 62 percent, believe marijuana should be legalized, according to Pew Research Center, a complete reversal from a decade ago.

Florida's next class of elected leaders will confront these changing attitudes. Will they do so from a position of personal experience?

Four of the 12 candidates acknowledged prior marijuana use, including the Democratic nominee for governor, Andrew Gillum. "Many years ago," his spokeswoman Johanna Cervone said. Gillum has advocated for legalizing marijuana and taxing it. So has Nikki Fried who is running on the platform of Cannabis, who responded, "Of course I have".